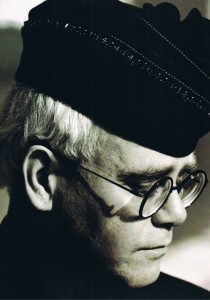 In Their Own Words

Elton John “I find on my voice I sound young again…on things like Sacrifice, and the single [Healing Hands] I seem to have more energy, I seem to have a sense I’m so much fresher than I have on other albums and I think it has a lot to do with the fact you’re under no pressure…with was just such a pleasure to make and I hadn’t had to go through anything during that particular time.” (1989, Entertainment Tonight) “”When you write something initially, when you’re doing a demo of a song, sometimes it gives you goosebumps. And when it does give you goosebumps, you kniw it’s  maybe a little bit more special than some of the other songs off the album. It doesn’t have very often. It happened on “Don’t Let the Sun Go Down On Me”, it happened on “Someone Saved My Life Tonight”, and a couple of other things. And it’s the one song off the album that, I really, I’m very, very, very fond of.  I mean I’m very fond of the album but I really love that song.” – 1990, (Arsenio Hall Show) “I didn’t see that [Sacrifice] being a hit. When I wrote that song in Denmark, I remember people in the studio saying oh that’s a hit, and I thought, I don’t know about that, but it’s a nice song.” – 1991 (Two Rooms) “…one of the best songs I did for a long time.” “…Like having my first hit record again.” “An important song for me.” (1991) Bernie Taupin “It’s a simple lyric, but it’s an intelligent, adult lyric. It’s basically about the rigors of adult love, and it’s a million miles away from “Your Song.” Elton came up with a brilliant melody, and his performance on it gives it a lot of integrity and meaning. It’s not a surface song, and I think you’ll probably see that one in the coming months becoming a big, big hit.” (1989) “When I hear it I’m always surprised I wrote it…I’ve always said that number [Your Song] sounds like a song about a 17-year-old guy who’s desperate to get laid. Which at the time it was. So naive. Now ‘Sacrifice’ is completely the opposite of that and to me the two songs are like bookends.” (1992) “I think “Sacrifice” [1989] is one of the best songs we’ve written.” (2001) “One of the songs I always loved was “Sacrifice” [No. 3 peak on AC in 1989]. That’s a classic song. ” (2011) Chris Thomas (producer): “I wanted to give [‘Sacrifice’] a really nice rhythm underneath; that sexy element.” – 1993 (Billboard)

“First time I ever heard “Sacrifice”, was at a concert in 1989 in Conn. He introduced the song, and I remember loving it. I later wrote my review: “The best ballad since “Sorry Seems To Be”, an Instant classic. Well the rest of the world took some time warming to it, but I think “live” the song is still one of his strongest more recent ballads. I have always pondered the lyrical “View” of it however. What does it really mean? what ….is not sacrifice…at all…leaving you? Loving you? Cheating opn you? I’m always confused, or intrigued. And is the lyric about Elton and Renate or Bernie? “If” Elton, it has MUCH more meaning.”
– Claude Bernardin