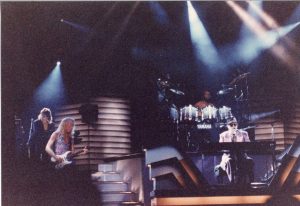 Jonathan “Sugarfoot” Moffett is a highly successful drummer in the world of entertainment. He plays multiple instruments and is both a songwriter and producer and has influenced drummers all over the world with his groundbreaking drum techniques and style. He is notorious for his “one-handed cymbal catch” which he came up with one late evening during a marathon practice session.

Jonathan “Sugarfoot” Moffett was born in New Orleans, Louisiana, the third son of a large musical family of siblings. His musical journey began with a marching snare drum at the tender age of six. By eight, he played at school dances, talent shows, and local house parties. At ten, he played in nightclubs with his two older brothers’ band.

In the following years, from age 12 to 23, he performed locally with several prominent bands throughout the region and built a reputation leading to his nickname, “Sugarfoot” for his incredibly fast-paced foot pedaling technique on the bass drum.

His unique drumming and style led him to perform on twenty-three major tours around the globe. He is in high demand by some of the world’s biggest superstars including Michael and the Jacksons, Madonna, Janet Jackson, Elton John, George Michael, Lionel Richie, Stevie Wonder, and many others.

Moffett has worked with other great artists including Madonna, Diana Ross, Elton John, George Michael, Lionel Richie, Stevie Wonder, Kenny G, Patti Austin, Vasco Rossi, and the Eagles, some live and and some in the recording studio or both.